Since the Colts franchise made its debut in Indianapolis, Indiana, in 1984, the organization has won two conference championships along with winning the prestigious Super Bowl — furthering the team’s national reputation and fandom across the country. The team’s home base is located at Lucas Oil Stadium, a state-of-the-art, multipurpose athletic venue with a retractable roof. This vastly impressive stadium boasts seating for 63,000 fans, has a pristine and innovative artificial turf field, 7 locker rooms, two-level club lounges, and 137 suites. It’s inevitable that with years of wear and tear, and long competitive schedules, that a team’s synthetic turf field will eventually start to look worn and outdated — especially when it comes to an ambitious, professional league like the NFL. The franchise knew a replacement was needed if it was going to continue to compete at a high level, support the safety of its athletes, and wow its crowds both on a local and national level. Because of the Colts’ national popularity and well-recognized brand, the franchise expects the highest safety, durability, and maintenance services for its artificial turf field at Lucas Oil Stadium. The franchise chose Motz to replace its synthetic turf field because of the company’s depth of experience, level of expertise, quality of service, and well-known reputation in the Cincinnati area and the NFL organization.

At the time of replacement, the Colts franchise had the oldest synthetic turf surface in the entire NFL — and it showed. The lines and hash marks on the field were degrading, the brilliant green color of the turf was faded, and the worn-out look and feel of the turf fibers were becoming glaringly obvious. These natural signs of aging are expected, and quite normal, as an artificial turf field starts nearing time of replacement. The turf’s faded appearance wasn’t the only reason for a replacement though; basic elements of the synthetic turf field surface posed quite a few issues too. Specifically, the field didn’t allow for quick design changes, which the Colts realized they needed for long-term success. Motz’ attention to detail and innovative team was exactly what the Colts were looking for in a strategic, trusted partnership for the project. 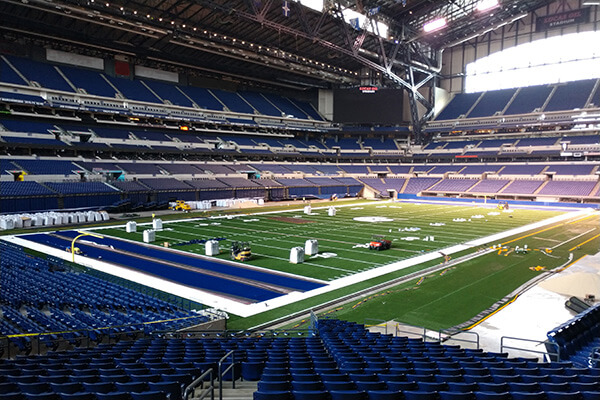 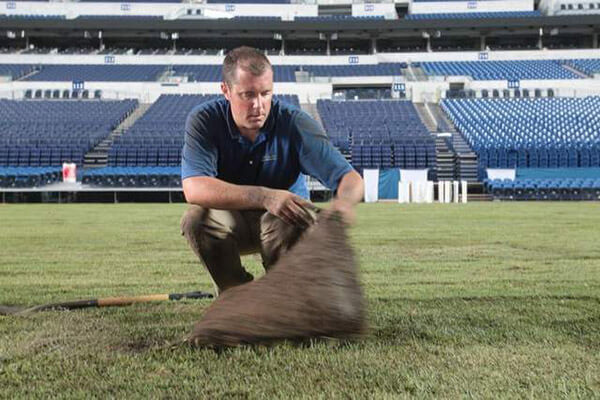 Motz’s team came on to the project with a strategic plan in place and the skills to revamp the Colts field — taking it from worn-out and faded to pristine and high-performing. Motz used advanced industry equipment to remove the existing turf smoothly and efficiently. The Motz team was able to utilize larger crews for longer shifts thanks to the retractable stadium roof, which created an indoor environment for workers and allowed them to get the job done more efficiently. The new synthetic turf field end zones were the biggest upgrade to the field — and arguably the most innovative as well. Motz’s new design approach allowed the end zones to be changed out for different events hosted at Lucas Oil Stadium, like the recent 2021 College National Championship for example. Within each end zone there are six synthetic turf panels. Motz’s innovative approach uses a heavy forklift to roll up the turf during the changing process. The rolls are placed on carts which are kept in storage and then blank canvas panels are rolled out into the empty end zones to be used. There were a few key design elements implemented for the end zones. One was the use of velcro to keep the panels secure and in place. The other was the use of glued-in letters, instead of paint, which creates a sharper look for letters and logos and adds to the longevity of the turf. Now, the new synthetic turf field at Lucas Oil Stadium gives the Colts a durable, safe, and high-performing surface to stay one step ahead of the competition. The field also gives them the flexibility they need to be able to change out the end zone panels easily for different event purposes, making their stadium a highly sought after event space.