Motz started the construction of a new grass field for the Baltimore Ravens in February of 2016. The project consisted of the removal of the existing synthetic turf field and the installation of a high-performance natural grass system. The renovation also included a new lighting technology, a repaired heating system, and updated drainage and irrigation structure. Motz also installed new communication boxes throughout the end zones and the first NFL stationed pylon cameras surrounding the M&T Stadium. 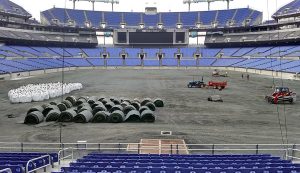 M&T Bank Stadium has featured synthetic turf since 2003. Like many other cold seasons, transition zone stadiums, weather, and low temperatures played a large part in why the Baltimore Ravens decided to go the synthetic route years ago. Now, with improved technologies in field heating and artificial lighting, the Ravens have put natural grass back in play. A synthetic turf system will be maintained as a surround to the grass playing surface.

The Baltimore Ravens began evaluating a conversion to grass in 2015 and decided in December of that year to “go natural.” After an exhaustive vetting process, they selected Motz to deliver the conversion project. To ensure play on a high-performance natural turf field for the 2016 NFL season, Motz took the field at M&T Bank Stadium in early February. Motz’s team began by removing and recycling the old synthetic turf field. From there, the workers excavated the gravel foundation, repaired the heating, drainage, and irrigation systems, and prepared the rootzone for placement. In early May, Motz’s team executed the final step by installing the Bermuda grass sod.

The impact of this new transition from synthetic turf to natural grass has been beneficial for the Baltimore Ravens players and the groundskeeper. The field has maintained consistency and performance for concerts, soccer events, and football games. Motz provided the Baltimore Raven’s groundskeeper with the right tools and technology to create a better experience for athletes and the ability to transition to concerts to fund the financial stability of the stadium with little impact on the natural field. Providing quality and high-performing resources to all those involved in the field industry – players, groundskeepers, grounds managers, and stadium owners – is what makes Motz a trusted field design and field construction partner within the industry and NFL.

For more information on the Baltimore Ravens’ turf conversion or if you would like to learn more about all of the high-performance sports field services Motz provides, please contact us now at 513.533.6452!

For nearly 40 years, The Motz Group has been committed to leaving a lasting legacy within the industry. We are high-performance turf specialists, focusing on sports field design, construction, removal, replacement, maintenance, and management. Motz has made their name by designing innovative and comprehensive performance-based sports field systems, tailored to its customer’s specific needs. The Motz Group builds fields from inception to completion with pride, professionalism, and the utmost integrity.